I’m going to throw a curve ball here. You guys ready? The next FO that I have to share is actually sewn and not knitted! If you’re saying to yourself, “I didn’t know she could sew,” you’d probably be right. My knowledge is tenuous at best, but that’s okay, because the Gypsum Skirt pattern is really easy. Like, no zippers, no buttons. It’s just about my speed.

The Gypsum Skirt is a pattern by Sew Liberated that is modeled to be a skirt version of their Arenite Pants. It features an elastic waist, flat felled seams, and huge ass side pockets. The pockets are really what make it. Also, if you need experience with french seams, the pockets offer an excellent opportunity to get comfortable with the process. If you’re a little nervous about the pockets, or just want a slightly different look, view B offers a more traditional side pocket option.

The pattern is intended for woven fabrics. Sew Liberated recommends a drapey fabric for View A like rayon challis, tencel twill,  or silk noil. But, I’m cheap and my local Joann’s is tragic so I made mine out of a shirting fabric. It still came out great. Like I mentioned before, the elasticized waist makes for easy finishing. This is great, because if it required a zipper or something, it would still be sitting unfinished by my couch.

So if you haven’t already gathered, I made View A…you know, for the pockets. I cut a size 6 (for reference, my waist is 27″ and my hips are 36″). I am happy with the size that I chose and would use the same size if I made it again. The construction of the skirt is really clever, with the french seamed pockets and the flat felled side panel seams. I did accidentally cut my back piece wrong and ended up having to seam the center back, but I don’t think it affected the end result.

The trickiest part for me was inserting the elastic and getting the waistband all sewed down. I may have fudged that part a bit. In the end though, I’m really happy with the finished piece and anticipate making it again in the future. And the best part? It’s SUPER comfortable. And it has pockets. 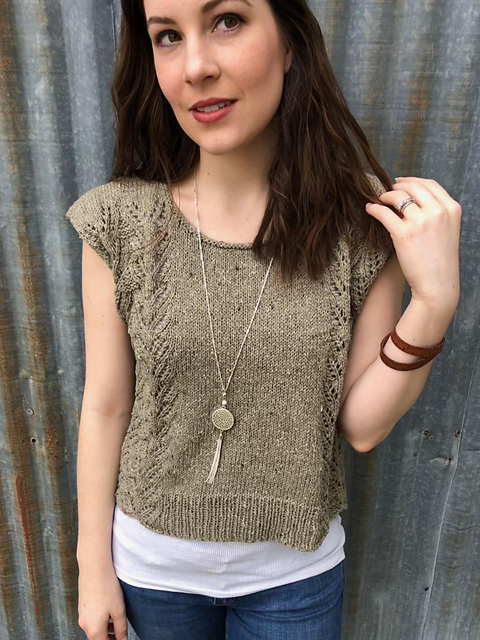 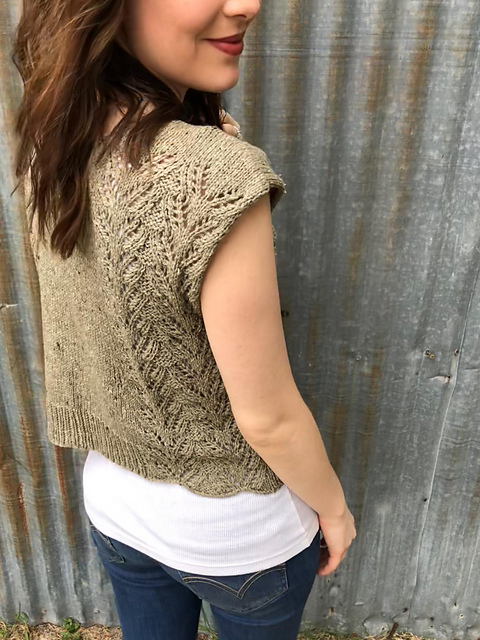 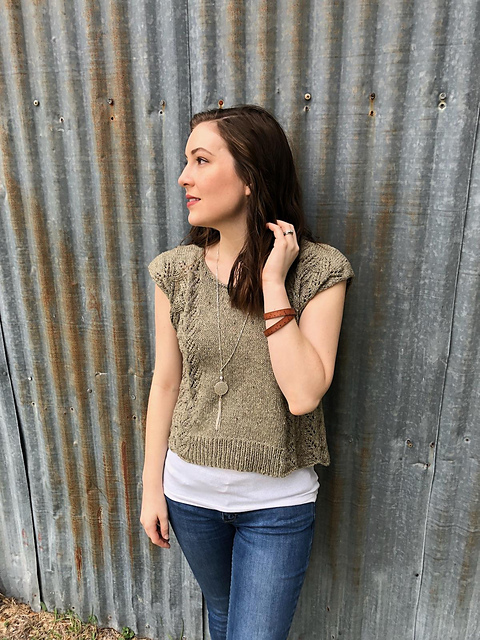 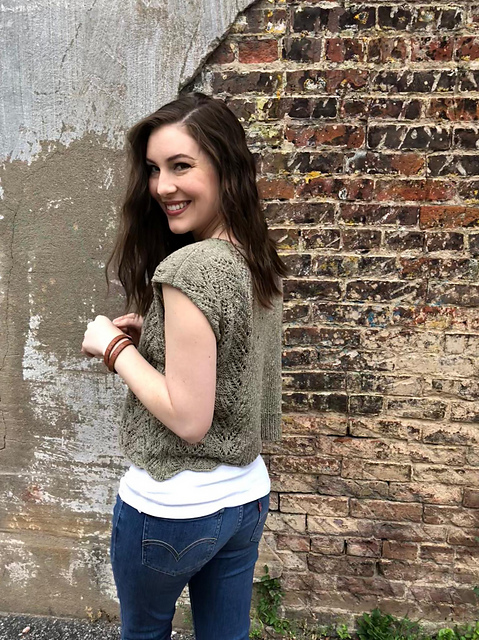 May I present to you, my newest, prettiest, comfiest sweater – the Grace Wrapper! I think I must be growing as a knitting because my sweater success ratio is improving dramatically. Swatches, you guys. They’re boring, but seem to be worth it. I made a sweater that fits! Like really well. And it’s really comfortable. And it’s adorable and classy and I feel like a fancy ballerina in it. Let’s talk about it! 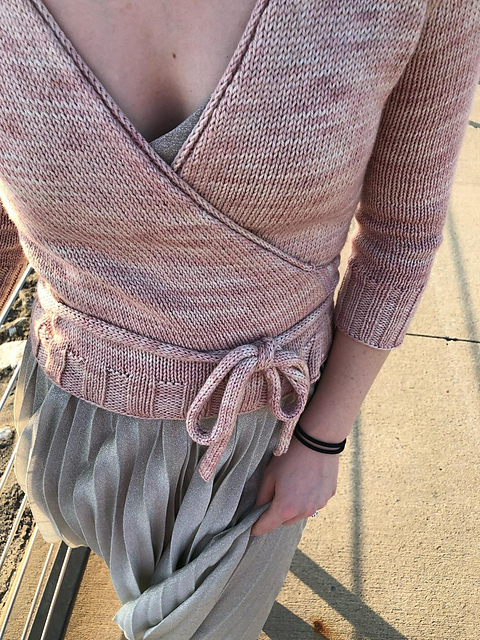 For this sweater I used a modified version of Kate Oates Grace Wrapper pattern. I had been scouting this pattern for some time. Pretty much from the moment I saw Christina Danaee’s version on Instagram. It was originally published in Grown: Sophisticated Sweater Designs from the Maker of Tot Toppers, but I didn’t really care for the rest of the patterns in the book. In the comments on Ravelry, Kate Oates hinted that it might be released independently in 2018. So I waited. Then I snapped it up.

As I mentioned before, I modified this pattern a bit. I changed the sleeves so that they ended in ribbing, rather than the bobble edge, which was a little too sweet for me.  On the underarm, I picked up 12, rather than the 4 or 5 stitches and decreased 2 stitches every 4th round until I got to 46 stitches. From there I knit in 2×2 ribbing for 3 inches. 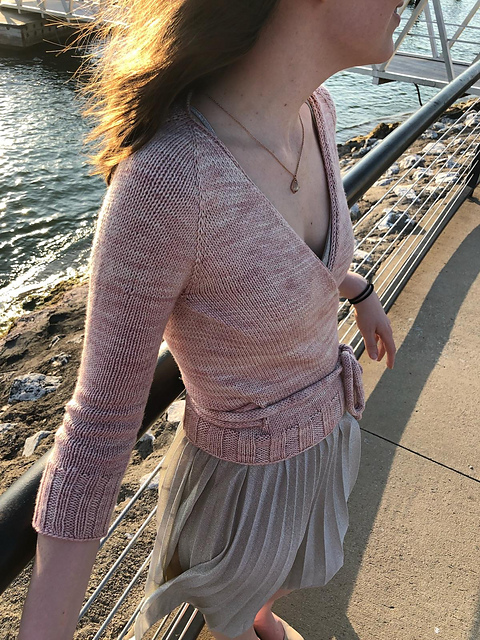 I also lengthened the body of  my Grace Wrapper slightly. I didn’t like the way the original pattern rolled at the bottom, and wanted to include a bit of ribbing. Because I only had 3 skeins of yarn – the ones I bought from the Fiber Festival – I was carefully to maximize what I had. So I knit the body to the length called for in the pattern and then put the stitches on a holder. Then I knit everything else. After everything else was finished I went back to the body and knit in 4×4 yarn until I pretty much ran out of yarn (saving some to finish the steek). I ended up adding about 2 inches to the sweater.

Then I blocked it and let it sit for several weeks while I got up the courage to steek the hole in the side for the wrap. I found lots of tutorials about how to steek something all the way open, but not for just making a little hole. So before I cut into my precious sweater, I knit a test swatch and steeked that. Then I brought it to knit night and had someone who’d steeked before take a look. Once she said it looked good, I put off steeking another week. Then one morning I just got up and steeked it! And it worked! I’m afraid to look to closely at it for fear that it will come apart, but I think it’s alright. 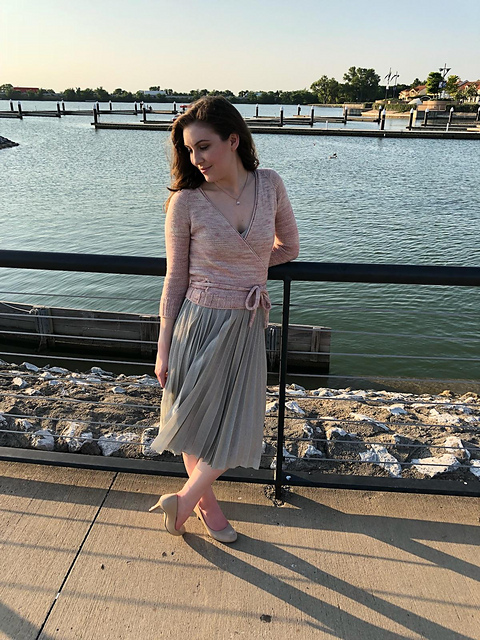 Bella DK is very nice to work with. It’s very smooth and blocks out beautifully. The color, Champagne, was just that subtle millennial pink that I was looking for. I promise. I searched the whole Fiber Fest and this was the best one! 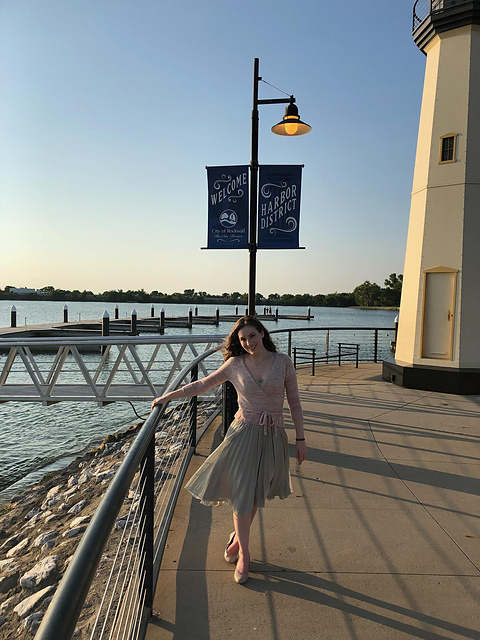 The only complaint that I have about this yarn is that it has an occasional speckle of other dye colors. Just every once in a while there is a random blue or orange dot. It didn’t bother me enough to cut them out, but there are some spots of my Grace Wrapper that look like I stabbed myself with a pen. So that’s a shame. Other than that, I had no issues with the yarn. I would totally use it again. I love the muted colors.

Of course, now that I finally steeked my grace wrapper its 100 degrees here in Texas. The poor thing will have to go into hibernation for a while until it gets cool again. While I wait, I’ve got some summer knits I’m working on. I can’t wait to show you when they’re done! What are you working on right now? I’d love to hear about it!